I recently met with a client who wanted to decrease her overall level of anxiety. She had a history of two panic attacks, but none in the past three years. She had been on two different anxiolytics for the past two years to stave off any future panic attacks.

On the day of her appointment, I asked about her specific anxiety symptoms, and to describe any sensations accompanying anxiety. She described a general nervous feeling, racing thoughts, and no physical sensations outside of those panic attacks. She did mention that she had trembling in her hands, which was constant, and probably a side effect of the medications she was taking. 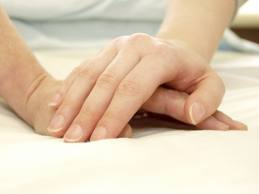 She showed me her hands, which were indeed trembling constantly, as a baseline. I told her that we would include the sensation in her hands just in case it was related, and do all the other components of clearing anxiety also.

"If we see a change, wonderful! If we don't, then we can be assured that it is related to something else, like the medication, and you'll follow up with your psychiatrist on that. Fair?" She agreed and neither of us had any sincere belief in the correlation between her constantly trembling hands and the anxiety which seemed more or less under control on a daily basis.

After 2 hours of RRT focused on anxiety that was both general and specific to the client, I checked in and her anxiety was very low, if noticeable at all. She was thrilled with how fast the feelings had gone away. I asked to see her hands and they were completely still. She made me put my hands up next to hers to compare, and they were just the same. She left one happy customer, and I was amazed at the power of RRT, once again, to clear what we didn't even know was going on beneath the surface!

Autumn Hahn is a Licensed Mental Health Counselor and Certified Clinical Hypnotherapist specializing in trauma. She works with adolescents and adults in her office in Weston, Florida. She can be reached for consultation or collaboration at 954-612-9553 and at www.ClearMindGroup.com.
You can also find her publications at www.amazon.com/author/autumnhahn or follow her on social media at www.twitter.com/ClearAutumn orwww.facebook.com/clearmindgroup/.
Posted by Dr. Jon Connelly at 7:30 AM