One of the most common problems faced by many people is anxiety. Many people with anxiety also experience what are called "panic" attacks. This is where the anxiety becomes so severe that the person literally thinks that they are dying or that something is seriously wrong with them. They often wind up in an emergency room or seeking medical treatment. The usual treatment for anxiety is for the

physician to prescribe medications to treat the symptoms. The most common medications used for treating anxiety are the benzodiazepines (Xanax, Klonopin, Ativan, or others). SSRI anti-depressants are also prescribed. These medications often provide some symptom relief, but in the case of benzodiazepines they can become habit forming and may require increasingly higher dosages to achieve the desired effects. For many years I have treated people with anxiety related disorders. The most common therapy for treating these problems has been Cognitive-Behavioral therapy. This approach has been somewhat effective and is the most common approach used by psychotherapists.

Over the past few years I have begun to use a new approach to treatment called Rapid Resolution Therapy, This approach, developed by Dr. Jon Connelly, is quite different than other forms of therapy, which may explain why it is so effective. With this approach the person learns how to eliminate the physical sensations caused from the anxiety response, thus disabling them. Common physical sensations associated with anxiety are: rapid heartbeat and breathing, light headedness, tingling, fainting, tension, nausea, numbness, to name a few. The person learns to recognize these sensations and eliminate them before they become too intense. After only 1 to 3 sessions, most clients have reported that their anxiety has drastically diminished and/or completely disappeared. Panic attacks actually disappear and are no longer problematic. All of this is done without medication. In fact, most of my clients report that they no longer need to rely on their anti-anxiety medications. (Note: please do not stop taking medications without your physician's advice).

I recently saw a client who had been suffering from debilitating anxiety and panic attacks. She had been to several therapists and doctors over the years and found little relief from her symptoms. She came to me desperate and feeling hopeless that her problems could be treated successfully. By the time she got to me she had become homebound and was unable to work. She had become isolated and the problems had caused friends and family to avoid her. She was skeptical that anything would work and saw herself being a recluse and invalid for the rest of her life.
{ "So, I am not crazy?" }

Upon meeting this woman I intently listened to her about her problems and began to explain to her how the mind works. She immediately perked up and became interested. "I never tho 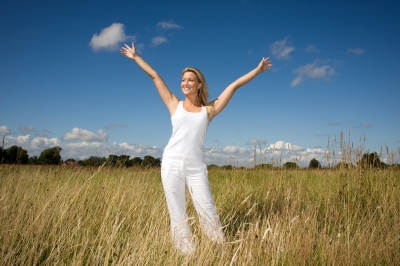 ught of it that way," she said. I also explained that anxiety is "fear of the fear response". For example, if one steps out into the street in front of an oncoming car their mind will immediately cause their body to become "supercharged" and cause her to jump out of the way. Her heart will pound, she will shake, and her breathing will increase. When she is safe her mind will cause her body to return to normal. Anxiety is when the mind causes the body to do the same thing, but what the person is noticing are the physical sensations caused from the fear response. Thinking that something is wrong will increase these sensations because the mind perceives a threatening situation. The normal fear response becomes the threat.

I taught the client how to decrease and eliminate these physical sensations, giving her a sense of control over her body and easing her mind. "So I am not crazy," she said. I laughed and told her that she wasn't.

It has been a few months since that session and the client reports that she has not had any further panic attacks and that her anxiety has diminished. She feels in control again and has begun to reconnect with friends and family.

Dr. Smith is a California licensed psychotherapist with a doctorate in psychology and addictions as well as a Master's degree in social work. He is a Certified Practitioner in Rapid Trauma Resolution Therapy and the first psychotherapist to be certified in this new approach in southern California. He maintains an active private practice in the Los Angeles area, and he is also a professor of alcohol and drug counseling at Mt. San Antonio College in Walnut, CA. For more information on Dr. Smith or to follow his blog, please visit johnsmithphd.com.
Posted by Dr. Jon Connelly at 9:30 AM