By Melinda Paige, Ed.S, LPC, LMHC, NCC
and Courtney Armstrong, LPC
Master Certified Practitioners, Rapid Resolution Therapy
Painful exposure techniques are not required to clear the emotional charge of a traumatic memory. All that is required is keeping the client "emotionally present" as she describes the details of the event. This concept was introduced by trauma clinician and founder of Rapid Resolution Therapy, Dr. Jon Connelly, Ph.D, LCSW. Current neuroscience and trauma research by Bessel van der Kolk, MD and Dan Siegel, MD have also reached similar conclusions.
Why does this work? According to Master Certified Practitioner Courtney Armstrong, LPC, it works because when we keep the client emotionally present, we are helping to prevent the amygdala from activating the fight/flight response. The problem is when the amygdala and fight/flight response go into high gear, the brain inhibits the function of the hippocampus and parts of the pre-frontal cortex. The hippocampus and certain aspects of the pre-frontal cortex are responsible for integrating memory and tempering emotional responses. If these parts of the brain are "off-line," then the memory stays seared into the deeper brain as a non-verbal, implicit, felt memory. When a memory stays in this implicit form, associated sensory details like smells, times of year, sounds, and visual images can trigger the same feelings of terror as the original event. However, these triggers are often "unconscious" to the client. 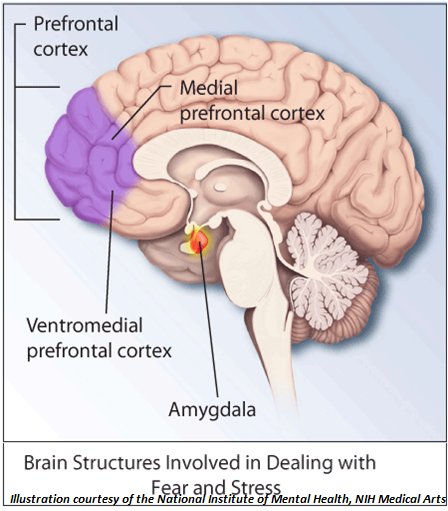 One goal of any trauma therapy is to integrate the traumatic memory into conscious, explicit memory. To do this, we have to keep the hippocampus and pre-frontal cortex open and on-line. If you have the client emotionally re-live the event then you inadvertently activate the fight/flight response right there in the session and cause the hippocampus and pre-frontal cortex to go offline again. According to Connelly (2011), in order to facilitate client recall of a traumatic event without abreaction, effective trauma therapists ground clients in the present by providing experiences in session that require them to respond emotionally to the present situation or "what is happening."
Connelly also suggests providing opportunities for clients to be in a "power position" while retelling the trauma narrative so that the client has a resolution experience which is the antithesis of the often disempowering traumatic event. This process allows the client's central nervous system to remain within the "window of tolerance" (van der Kolk, 2010) for reintegration of the previously traumatic memory within normal memory.
Posted by Dr. Jon Connelly at 7:30 AM